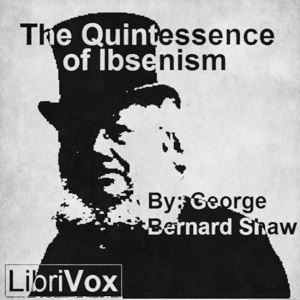 Download or Stream instantly more than 55,000 audiobooks.
Listen to "The Quintessence of Ibsenism" on your iOS and Android device.

George Bernard Shaw, a playwright with a few bones to pick of his own, undertakes a surgical analysis of the social philosophies underlying the work of Henrik Ibsen. Focusing his analysis on Ibsen's challenge to the conventional "ideals" which both Ibsen and Shaw consider the greatest evils in human society, Shaw summarizes and exposits sixteen of Ibsen's plays, seizing the opportunity to elucidate some of the principles dearest to himself. Some of the most striking passages reveal Shaw's radical feminist perspectives, some of which resonate as if a half-century ahead of their time. A fascinating revelation of the minds of two great and revolutionary writers (it's not always obvious whose voice is exactly whose), this always-timely book exposes hypocrisies still poisoning Society in the twenty-first century. - Summary by Expatriate