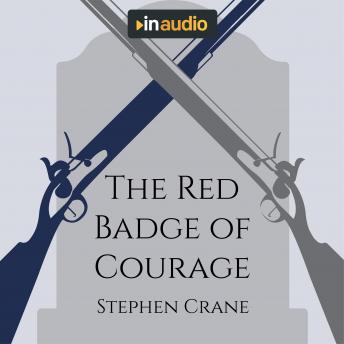 Commonly considered Stephen Crane's greatest accomplishment, The Red Badge of Courage ranks among the foremost literary achievements of the modern era. It is the story of Private Henry Fleming who goes into the Civil War, a hot-headed young patriot with his mind brimful of ideas of glory.

Stephen Crane was born in 1871 in New Jersey and attended Lafayette College and Syracuse University. He never completed his education but moved to New York and reported for the Herald and Tribune. At the age of twenty-four, never having experienced war himself, Crane wrote The Red Badge Of Courage which made him a huge success. Because of this, he was pushed into war reporting for most of his life. His popular short story, 'The Open Boat,' was based on his experience of being trapped in a sinking ship.

Narrator Sean Pratt, makes his home in Washington, DC. He has been pursuing his film and TV career and can be seen in Walt Disney's, Tuck Everlasting and as Dr. Hunter McGuire in the Warner Brothers movie, Gods and Generals.