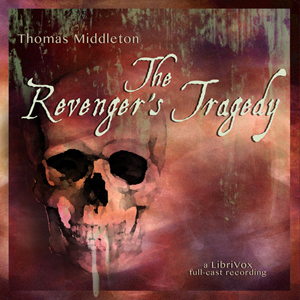 Download or Stream instantly more than 55,000 audiobooks.
Listen to "The Revenger's Tragedy" on your iOS and Android device.

"When the bad bleeds, then is the tragedy good." The Revenger's Tragedy is a bloody Jacobean drama centering on Vindici, whose beloved has been murdered by the Duke. Aided by his brother Hippolito, Vindici plans to take revenge not only on the Duke, but on his lecherous Duchess (who is having an affair with her stepson, Spurio) and his sons Lussurioso (Lust), Ambitioso (Ambition), and Supervacuo (Excess). The play was published anonymously in 1606 and for several centuries was attributed to Cyril Tourneur; more recent scholarship has pointed to Thomas Middleton as the likely author. The play was part of the vogue for revenge tragedy in late 16th and early 17th century England, and has often been compared to Hamlet. (Summary by Elizabeth Klett)