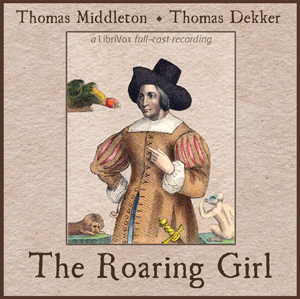 Download or Stream instantly more than 55,000 audiobooks.
Listen to "The Roaring Girl" on your iOS and Android device.

The Roaring Girl is a rip-roaring Jacobean comedy co-written by Thomas Middleton and Thomas Dekker and first published in 1611. The play is a fictionalized dramatization of the life of Mary Frith, known as "Moll Cutpurse", a woman who had gained a reputation as a virago in the early 17th century. (The term "roaring girl" was adapted from the slang term "roaring boy", which was applied to a young man who caroused publicly, brawled, and committed petty crimes.) The play combines the exploits of the cross-dressed Moll with the amorous adventures of a trio of merchants' wives, and the forbidden romance between Sebastian Wengrave and Mary Fitzallard. (Summary by Elizabeth Klett and Wikipedia)