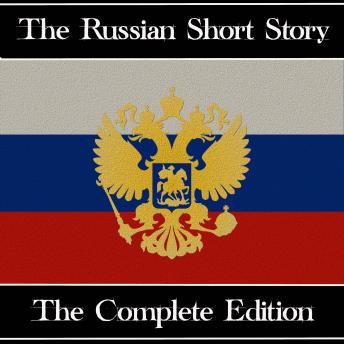 Download or Stream instantly more than 55,000 audiobooks.
Listen to "The Russian Short Story - Complete Edition" on your iOS and Android device.

The Russian novel has a reputation that is immense, both in narrative and in length. Unquestionably though the ideas, themes and characters make many novels rightly revered as world class, as icons of literature.Perhaps an easier way to enjoy a wider selection of the Russian heritage, with its varied and glorious literary talents, is with the short story. These gems sparkle and beguile the mind with their characters and narrative, exploring facets of society and the human condition that more Western authors somehow find more difficult to navigate, or to explore, explain and relate to. The Russian short story is, in many respects, in a genre of its own. It is at its captivating best whether it’s an exploration of real-life experiences, through fantasy and fables and on to total absurdity.In a land so vast it is unsurprising that it is a world almost unto itself. Cultures and landscapes of differing hues are packed together bound only by the wilful bonds and force of Empire.The stories in this collection traverse the decades where one might be a serf under an absolute monarch, and the reality of that was pretty near to slavery, into an emancipation of sorts in the fields, or towns under the despotic will of landowners and the rich into the upheavals of Empire and then the overthrow of the ruling class and its replacement by the communists, who promised equality for all and delivered a society where the down-trodden remained the lowest yet vital cog of the state machine and its will. Whilst Tolstoy, Gogol, Dostoevsky, Pushkin and Chekhov are a given in any Russian collection we also explore and include Andreyev, Korolenko, Turgenev, Blavatsky and many others to create a world rich and dense across a sprawling landscape of diverse people, riddled with the class and unfairness in perhaps some of the most turbulent times that Russia has ever experienced.01 - The Russian Short Story - The Complete Edition - An Introduction02 - The Queen of Spades by Alexander Pushkin03 - The Stationmaster by Alexander Pushkin04 - The Blizzard by Alexander Pushkin05 - The Coffin Maker by Alexander Pushkin06 - The Shot by Alexander Pushkin07 - St Johns Eve by Nikolai Gogol08 - The Cloak by Nikolai Gogol also known as 'The Overcoat'09 - Old Fashioned Landowners by Nikolai Gogol10 - The Nose by Nikolai Gogol11 - Diary of a Madman by Nikolai Gogol12 - Taman by Mikhail Yurievich Lermontov13 - The Jew by Ivan Turgenev14 - The Rendezvous by Ivan Turgenev15 - A Strange Story by Ivan Turgenev16 - Mumu by Ivan Turgenev17 - The District Doctor by Ivan Turgenev18 - The Dream of a Ridiculous Man by Fyodor Dostoyevsky19 - The Beggar Boy at Christ's Christmas Tree by Fyodor Dostoyevsky20 - An Honest Thief by Fyodor Dostoyevsky21 - The Crocodile. An Extraordinary Incident - Part 1 by Fyodor Dostoyevsky22 - The Crocodile. An Extraordinary Incident - Part 2 by Fyodor Dostoyevsky23 - Bobok by Fyodor Dostoyevsky24 - How a Muzhik Fed Two Officials by Nikolai Schedrin25 - Diary of a Lunatic by Leo Tolstoy26 - Aloysha the Pot by Leo Tolstoy27 - How Much Land Does A Man Need by Leo Tolstoy28 - The Snowstorm - Part 1 by Leo Tolstoy29 - The Snowstorm - Part 2 by Leo Tolstoy30 - God Sees The Truth But Waits by Leo Tolstoy31 - The Sentry by Nikolai Lyeskov32 - A Witch's Den by Helena Blavatsky33 - The General's Will by Vera Jelihovsky34 - The Old Bell Ringer by Vladimir Korolenko35 - The Shades, A Phantasy by Vladimir Korolenko36 - The Signal by Vsevolod Garshin37 - Dethroned by I N Potapenko38 - The Kiss by Anton Chekhov39 - The Lady with the Dog by Anton Chekhov40 - The Bet by Anton Chekhov41 - Gooseberries by Anton Chekhov42 - About Love by Anton Chekhov43 - Vanka by Anton Chekhov44 - Hide And Seek or Pliatki by Fyodor Sologub45 - In The Steppe by Maxim Gorky46 - Chelkash - Part 1 by Maxim Gorky47 - Chelkash - Part 2 by Maxim Gorky48 - Chelkash - Part 3 by Maxim Gorky49 - Twenty-Six Men and a Girl by Maxim Gorky50 - One Autumn Night by Maxim Gorky51 - Her Lover by Maxim Gorky52 - The Servant by S T Semyonov53 - Son by Ivan Bunin54 - Kasimir Stanislavovitch by Ivan Bunin55 - Gentle Breathing by Ivan Bunin56 - The Outrage by Alexander Kuprin57 - The Park of Kings by Alexander Kuprin58 - Cain by Alexander Kuprin59 - Anathema by Alexander Kuprin60 - An Evening Guest by Alexander Kuprin61 - Silence by Leonid Andreyev62 - Lazarus by Leonid Andreyev63 - The Lie by Leonid Andreyev64 - The City by Leonid Andreyev65 - The Republic of the Southern Cross by Valery Bryusov66 - The Revolutionist by Mikhail Petrovich Artzybashev67 - Light by Achmed Abdullah68 - Morphine by Mikhail Bulgakov69 - The Murderer by Mikhail Bulgakov70 - The Blind Ones by Isaac Babel