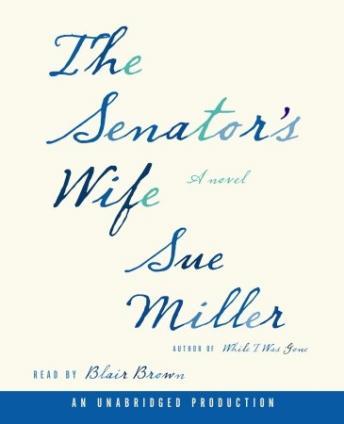 Download or Stream instantly more than 55,000 audiobooks.
Listen to "The Senator's Wife" on your iOS and Android device.

Once again Sue Miller takes us deep into the private lives of women with this mesmerizing portrait of two marriages exposed in all their shame and imperfection, and in their obdurate, unyielding love.

Meri is newly married, pregnant, and standing on the cusp of her life as a wife and mother, recognizing with some terror the gap between reality and expectation. Delia Naughton–wife of the two-term liberal senator Tom Naughton–is Meri’s new neighbor in the adjacent New England town house. Delia’s husband’s chronic infidelity has been an open secret in Washington circles, but despite the complexity of their relationship, the bond between them remains strong. What keeps people together, even in the midst of profound betrayal? How can a journey imperiled by, and sometimes indistinguishable from, compromise and disappointment culminate in healing and grace? Delia and Meri find themselves leading strangely parallel lives, both reckoning with the contours and mysteries of marriage, one refined and abraded by years of complicated intimacy, the other barely begun.

Here are all the things for which Sue Miller has always been beloved–the complexity of experience precisely rendered, the richness of character and emotion, the superb economy of style–fused with an utterly engrossing story.