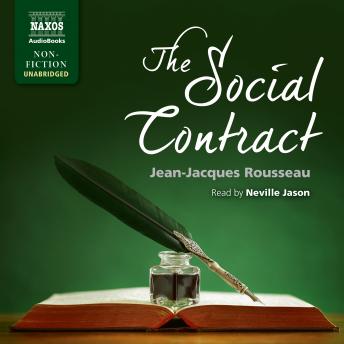 Download or Stream instantly more than 55,000 audiobooks.
Listen to "The Social Contract" on your iOS and Android device.

Man is born free, and everywhere he is in chains. In The Social Contract, Rousseau explores the concept of freedom and the political structures that may enable people to acquire it. He argues that the sovereign power of a state lies not in any one ruler, but in the will of the general population. Rousseau argues that the ideal state would be a direct democracy where executive decision-making is carried out by citizens who meet in assembly, as they would in the ancient city-state of Athens. The thoughts contained in the work were instrumental to the advent of the American Revolution and became sacred to those leading the French Revolution. With traces of Aristotle and echoes of Plato's Republic, The Social Contract is an exhilarating look at society and the definition of democracy. New translation by Ian Johnston.