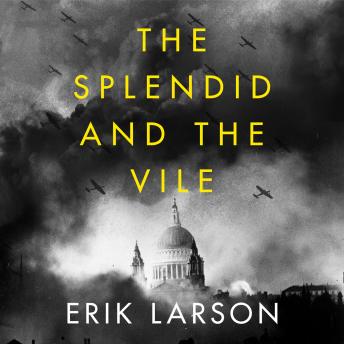 The Splendid and the Vile: A Saga of Churchill, Family and Defiance During the Blitz

Download or Stream instantly more than 55,000 audiobooks.
Listen to "The Splendid and the Vile: A Saga of Churchill, Family and Defiance During the Blitz" on your iOS and Android device.

‘Every time Churchill took to the airwaves it was as if he were injecting adrenaline-soaked courage directly into the British people … Larson tells the story of how that feat was accomplished … Fresh, fast and deeply moving.’ New York Times

On Winston Churchill’s first day as prime minister, Hitler invaded Holland and Belgium. Poland and Czechoslovakia had already fallen, and the Dunkirk evacuation was just two weeks away. For the next twelve months, the Nazis would wage a relentless bombing campaign, killing 45,000 Britons and destroying two million homes.


In The Splendid and the Vile, Erik Larson gives a new and brilliantly cinematic account of how Britain’s most iconic leader set about unifying the nation at its most vulnerable moment, and teaching ‘the art of being fearless.’


Drawing on once-secret intelligence reports and diaries, #1 bestselling author Larson takes readers from the shelled streets of London to Churchill’s own chambers, giving a vivid vision of true leadership, when – in the face of unrelenting horror – a leader of eloquence, strategic brilliance and perseverance bound a country, and a family, together.