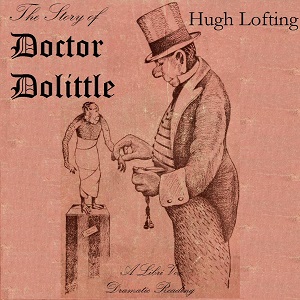 Download or Stream instantly more than 55,000 audiobooks.
Listen to "The Story of Doctor Dolittle (Dramatic Reading)" on your iOS and Android device.

John Dolittle, M. D., was once a famous doctor. But then he learned to talk Animal-Language, picked up several interesting pets, and gradually began to lose his patients. Finally the only patient who remains, the Cat's-Meat-Man, makes a suggestion - why doesn't he give up treating people and become an animal doctor?

And so Dr. Dolittle becomes an animal doctor, and life seems to be going well. But with the addition of an escaped crocodile to his store of pets, even the animals stop coming to see him. What to do?

Children of all ages - and adults too - will enjoy the story of the good Doctor and his animals as he travels to Africa and back, braves shipwrecks and pirates, escapes from prison, and tries to reunite a little boy with his kidnapped uncle, all with the help of his charming animal friends. (Summary by Rachel)

Please note that this book was written at a different time and includes attitudes which are now considered racist. Some modern editions are available with some of this changed - this recording is of the original public domain text, as it was first published in 1920.