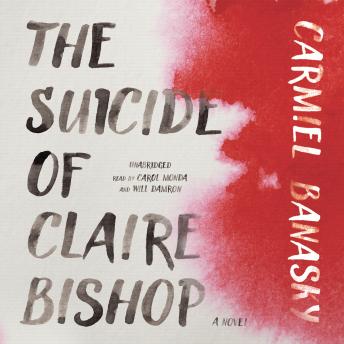 The Suicide of Claire Bishop: A Novel

Download or Stream instantly more than 55,000 audiobooks.
Listen to "The Suicide of Claire Bishop: A Novel" on your iOS and Android device.

Greenwich Village, 1959. Claire Bishop sits for a portrait—a gift from her husband—only to discover that what the artist has actually depicted is Claire’s suicide. Haunted by the painting, Claire is forced to redefine herself within a failing marriage and a family history of madness. Shifting ahead to 2004, we meet West, a young schizophrenic obsessed with a painting he encounters in a gallery: a mysterious image of a woman’s suicide. Convinced it was painted by his ex-girlfriend, West constructs an elaborate delusion involving time-travel, Hasidism, art theft, and the terrifying power of representation. When the two characters finally meet, delusions are shattered and lives are forever changed.

The Suicide of Claire Bishop is a dazzling debut, evocative of Michael Cunningham’s The Hours and Virginia Woolf’s classic Mrs. Dalloway, as well as Donna Tartt’s bestseller The Goldfinch. With high stakes that reach across American history, Carmiel Banasky effortlessly juggles balls of madness, art theft, and time itself, holding the listener in a thrall of language and personal consequences. Daring, sexy, and emotional, The Suicide of Claire Bishop heralds Banasky as an important new talent.

“Daring, precise, and linguistically acrobatic, this novel brings a history of America alive, from the war protests in the sixties to turn-of-the-twenty-first-century art theft. A fearless portrayal of madness and its consequences…This is a new writer to savor, reminiscent of Nicole Krauss, Michael Chabon, and Andy Sean Greer.”—Colum McCann, National Book Award–winning author