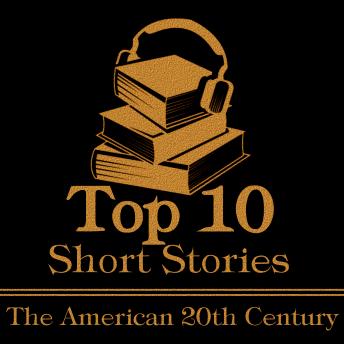 Download or Stream instantly more than 55,000 audiobooks.
Listen to "The Top Ten - American 20th Century" on your iOS and Android device.

Short stories have always been a sort of instant access into an author's brain, their soul and heart. A few pages can lift our lives into locations, people and experiences with a sweep of landscape, narration, feelings and emotions that is difficult to achieve elsewhere.In this series we try to offer up tried and trusted 'Top Tens' across many different themes and authors. But any anthology will immediately throw up the questions - Why that story? Why that author? The theme itself will form the boundaries for our stories which range from well-known classics, newly told, to stories that modern times have overlooked but perfectly exemplify the theme. Throughout the volume our authors whether of instant recognition or new to you are all leviathans of literature.Some you may disagree with but they will get you thinking; about our choices and about those you would have made. If this volume takes you on a path to discover more of these miniature masterpieces then we have all gained something.America has come to be the muscle and intellect of a world diminished by war and starved of virtue. True, she has faults and flaws but she has drive, ambition and a seemingly endless reach. Her literary geniuses enthrall and seduce us all with works that are bold, incisive and speak in a uniquely American way.1 - The Top 10 - The American 20th Century - An Introductionx2 - Hands by Sherwood Anderson3 - On The Gulls Road by Willa Cather4 - The Most Dangerous Game by Richard Connell5 - Bernice Bobs Her Hair by F Scott Fitzgerald6 - A Jury of Her Peers by Susan Glaspell7 - The Gift of the Magi by O Henry8 - To Build A Fire by Jack London9 - The Color Out of Space by H P Lovecraft10 - Here We Are by Dorothy Parker11 - Eves Diary by Mark Twain