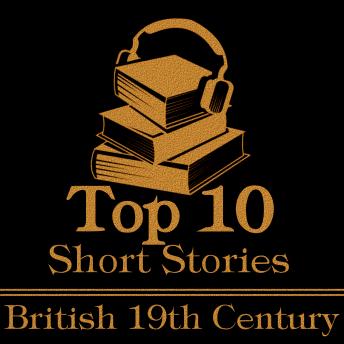 Download or Stream instantly more than 55,000 audiobooks.
Listen to "The Top Ten - The British 19th Century" on your iOS and Android device.

Short stories have always been a sort of instant access into an author's brain, their soul and heart. A few pages can lift our lives into locations, people and experiences with a sweep of landscape, narration, feelings and emotions that is difficult to achieve elsewhere.In this series we try to offer up tried and trusted 'Top Tens' across many different themes and authors. But any anthology will immediately throw up the questions - Why that story? Why that author? The theme itself will form the boundaries for our stories which range from well-known classics, newly told, to stories that modern times have overlooked but perfectly exemplify the theme. Throughout the volume our authors whether of instant recognition or new to you are all leviathans of literature.Some you may disagree with but they will get you thinking; about our choices and about those you would have made. If this volume takes you on a path to discover more of these miniature masterpieces then we have all gained something.This is the century where publishing became truly a mass-market phenomenon as a multitude of magazines, journals and periodicals flooded the streets, each eager to persuade an audience that their literary offering was the one to purchase. Every author, known and unknown, wanted their words set in their inky type. These writers abound in literary talent and an ability to tell captivating stories. Genius has many names.01 - The Top 10 - The British 19th Century - An Introduction17 - The Inconsiderate Waiter by J M Barrie03 - A Terribly Strange Bed by Wilkie Collins01 - Youth by Joseph Conrad05 - The Signalman by Charles Dickens06 - B24 by Arthur Conan Doyle07 - The Old Nurse's Story by Elizabeth Gaskell08 - The Withered Arm by Thomas Hardy09 - The Man Who Would Be King by Rudyard Kipling16 - The Body Snatcher by Robert Louis Stevenson11 - The Burial of the Rats by Bram Stoker