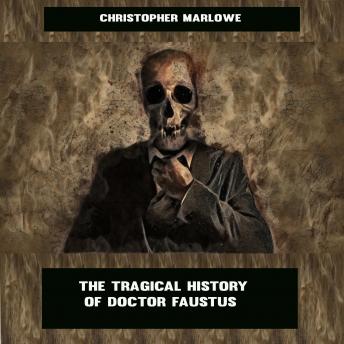 The Tragical History of Doctor Faustus

Download or Stream instantly more than 55,000 audiobooks.
Listen to "The Tragical History of Doctor Faustus" on your iOS and Android device.

The Tragical History of the Life and Death of Doctor Faustus, commonly referred to simply as Doctor Faustus, is an Elizabethan tragedy by Christopher Marlowe, based on German stories about the title character Faust, that was first performed sometime between 1588 and Marlowe's death in 1593. Two different versions of the play were published in the Jacobean era, several years later. One of the most durable myths in Western culture, the story of Faust tells of a learned German doctor who sells his soul to the devil in exchange for knowledge and power. Early enactments of Faust's damnation were often the raffish fare of clowns and low comedians. But the young Elizabethan playwright Christopher Marlowe (1564-1593) recognized in the story of Faust's temptation and fall the elements of tragedy. In his epic treatment of the Faust legend, Marlowe retains much of the rich phantasmagoria of its origins. There are florid visions of an enraged Lucifer, dueling angels, the Seven Deadly Sins, Faustus tormenting the Pope, and his summoning of the spirit of Alexander the Great. But the playwright created equally powerful scenes that invest the work with tragic dignity, among them the doomed man's calling upon Christ to save him and his ultimate rejection of salvation for the embrace of Helen of Troy. With immense poetic skill, and psychological insight that foreshadowed the later work of Shakespeare and the Jacobean playwrights, Marlowe created in Dr. Faustus one of the first true tragedies in English. Vividly dramatic, rich in poetic grandeur, this classic play remains a robust and lively exemplar of the glories of Elizabethan drama.