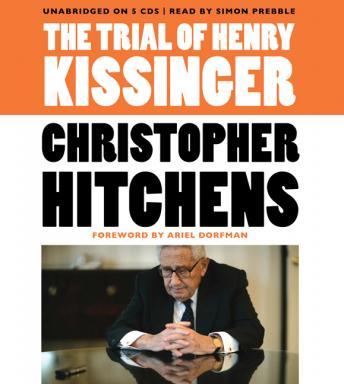 The Trial of Henry Kissinger

Download or Stream instantly more than 55,000 audiobooks.
Listen to "The Trial of Henry Kissinger" on your iOS and Android device.

'If the courts and lawyers of this country will not do their duty, we shall watch as the victims and survivors of this man pursue justice and vindication in their own dignified and painstaking way, and at their own expense, and we shall be put to shame.'

Forget Pinochet, Milosevic, Hussein, Kim Jong-il, or Gaddafi: America need look no further than its own lauded leaders for a war criminal whose offenses rival those of the most heinous dictators in recent history-Henry Kissinger.

Employing evidence based on firsthand testimony, unpublished documents, and new information uncovered by the Freedom of Information Act, and using only what would hold up in international courts of law, The Trial of Henry Kissinger outlines atrocities authorized by the former secretary of state in Indochina, Bangladesh, Chile, Cyprus, East Timor, and in the plight of the Iraqi Kurds, 'including conspiracy to commit murder, kidnap, and torture.'

With the precision and tenacity of a prosecutor, Hitchens offers an unrepentant portrait of a felonious diplomat who 'maintained that laws were like cobwebs,' and implores governments around the world, including our own, to bring him swiftly to justice.