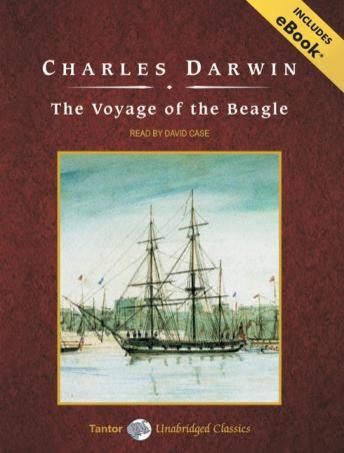 The Voyage of the Beagle

Download or Stream instantly more than 55,000 audiobooks.
Listen to "The Voyage of the Beagle" on your iOS and Android device.

Charles Darwin was just twenty-two when he went on his first voyage around the world in 1831. Darwin's father at first refused to allow his young son to go on the voyage. Fortunately, his father relented, and Darwin's journal is now considered by many to be the greatest scientific travel narrative ever written.

Revised by the author in 1860, this is an account of his experiences on the HMS Beagle, a ship that was mapping the coast of South America. What was set to be a two- or three-year voyage stretched out to a five-year adventure. Darwin took copious notes during the voyage, notes that would later lead to his formulation of the theory of evolution. He was able to observe coral reefs, fossil-filled rocks, earthquakes, and more, firsthand, and then make his own deductions.