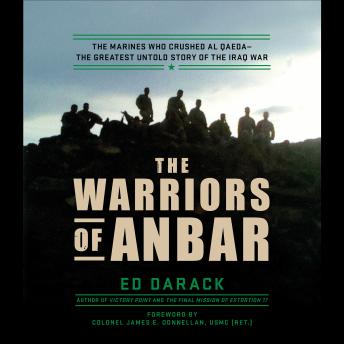 The Warriors of Anbar: The Marines Who Crushed Al Qaeda--the Greatest Untold Story of the Iraq War

Download or Stream instantly more than 55,000 audiobooks.
Listen to "The Warriors of Anbar: The Marines Who Crushed Al Qaeda--the Greatest Untold Story of the Iraq War" on your iOS and Android device.

A riveting, edge-of-your seat account of how a battalion of Marines faced off against the most brutal of Al Qaeda at its most desperate and vicious moment--and how the Marines decisively crushed the terroristsWhen the 2nd Battalion of the 3rd Marine Regiment ('2/3') arrived in the little-known 'Haditha Triad' region of western Iraq's Al Anbar Province in September of 2006, the region exploded in a storm of terrorist violence. The most battle-hardened of Al Qaeda had fled to the Triad, and, taking their last, desperate gasps for survival after years of bloody war, lashed out at the battalion with everything they could muster. The Marines sent into this firestorm of violence immediately lunged into a complex, double-edged mission: crush Al Qaeda and help the locals rebuild their terrorist-smashed lives and homes. After months of grueling, fearsome battle--and the loss of twenty-three of their ranks--the warriors of 2/3 stood tall in victory. This is their incredible story.Warriors of Anbar is one of the greatest untold stories of modern war, one of grit, incredible courage, and utmost sacrifice. It is a story that illustrates the U.S. Marine Corps at its very finest.