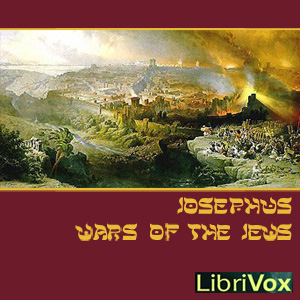 The Wars of the Jews

Download or Stream instantly more than 55,000 audiobooks.
Listen to "The Wars of the Jews" on your iOS and Android device.

The Wars of the Jews (or The History of the Destruction of Jerusalem, or as it usually appears in modern English translations, The Jewish War - original title: Phlauiou Iôsêpou historia Ioudaïkou polemou pros Rhômaious bibliona) is a book written by the 1st century Jewish historian Josephus.

It is a description of Jewish history from the capture of Jerusalem by the Seleucid ruler Antiochus IV Epiphanes in 164 BC to the fall and destruction of Jerusalem in the First Jewish-Roman War in AD 70. The book was written about 75, originally in Josephus's "paternal tongue", probably Aramaic, though this version has not survived. It was later translated into Greek, probably under the supervision of Josephus himself.

The sources of knowledge that we have of this war are Josephus's account and from the Talmud (gittin 57b) and in midrash Eichah. (Summary by Wikipedia)