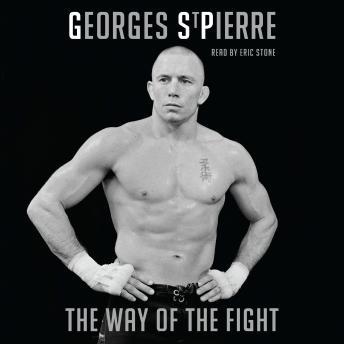 The Way of the Fight

Download or Stream instantly more than 55,000 audiobooks.
Listen to "The Way of the Fight" on your iOS and Android device.

There's more to winning battles than fists and feet

For world-renowned professional fighter Georges St-Pierre, the greatest asset is not physical strength or athleticism-it's a sense of purpose. From his beginnings as a small, mercilessly bullied child first discovering karate to his years as a struggling garbage collector who spent all his free time in the gym, his hard-fought rise in the sport of mixed martial arts, and his long, painful recovery from a career-threatening injury, Georges never lost sight of his ambition to become the greatest martial artist of all time. In The Way of the Fight, Georges for the first time reveals what propelled him not only to become a champion but to embrace obstacles as opportunities to build character.

Georges's story is interwoven with fascinating insights from those who know him best: his mother, who tells of his drive to master new skills, even as a child. His mentor Kristof Midoux, who describes a young fighter with an extraordinary sense of discipline. His Brazilian Jiu-Jitsu teacher John Danaher, who witnessed the development of an indomitable work ethic. His coach Firas Zahabi, who worked alongside the champion through a potentially career-ending injury. And his longtime friend, training partner and manager, Rodolphe Beaulieu, who may understand this intensely focused athlete more than anyone.

The Way of the Fight is an inspirational look into the mindset of a master. To Georges, all life is competition, and there's no more perfect metaphor for competition than the life of a fighter. He explains the value of discipline, risk and even fear, with the wisdom of one who knows that nothing is assured-his next fight could always be his last. Drawing inspiration from fighting legends, Eastern philosophy and a trusted inner circle, The Way of the Fight is a powerful, life-changing guide to living with purpose and finding the way to accomplish your loftiest goals.