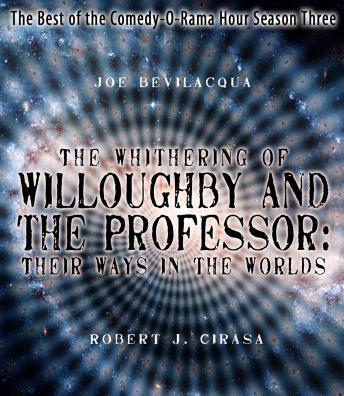 The Whithering of Willoughby and the Professor: Their Ways in the Worlds: The Best of the Comedy-O-Rama Hour Season Three

Download or Stream instantly more than 55,000 audiobooks.
Listen to "The Whithering of Willoughby and the Professor: Their Ways in the Worlds: The Best of the Comedy-O-Rama Hour Season Three" on your iOS and Android device.

The Whithering of Willoughby and the Professor: Their Ways in the Worlds, The Best of the Comedy-O-Rama Hour Season Three, produced, directed and voiced by Joe Bevilacqua, with David Garland and Margaret Juntwait, written by Joe Bevilacqua and Robert J. Cirasa, theme music by David Garland, musical numbers written by Joe Bevilacqua, performed by the Paul Salomone Trio with Paul on piano, Ed Fuqua on bass and Jim Mason on drums. This is epic science-fiction fantasy comedy, in the Monty Python/Terry Gilliam vein about a boy and his professor who travel willy-nilly across time and space in failed attempt to ''cure the world of all its ills.'' Stories include: Episode One: "I'll Teach You!" or "Box of Nothing" Episode Two: "Holy Smoke" or "The Red-Suited Man" Episode Three: "More Edible Than Durable" or "You Smashed My Monkey!" Episode Four: "Oh Boy, She Looks Great!" or "Which Witchway is Which?" Episode Five: "Your Separate World Lines" or "I'm Big and You're Small" Episode Six: "Now It's Time To Sing!" or "Unwanted Noises in the Air" Episode Seven: "I Like This Box!" or "Oh Victim Man!" Episode Eight: "Oh Dalai" or "Life is Dukka" Episode Nine: "The Traveling Extravaganza" or "His Name is Bub" Episode Ten: "More Dogs For Me?" or "Knock-a-knock-knuckles" Episode Eleven: "You're a Messiah" or "Buboes in the Lymph Nodes" Episode Twelve: "A Box in the Dark'' or Dead Men Do Not Groan" Episode Thirteen: "Is Eloquence a Bauble" or "Where's My Cyaneus" Episode Fourteen: "I Do Not Like the Blackness of Her Nose" or "The Penguins Laugh at You! Episode Fifteen: "The Genius of These Woods" or "I'm Also Wearing Explosives" Episode Sixteen: "Say Jacques!" or "She's Got Kneepads!"