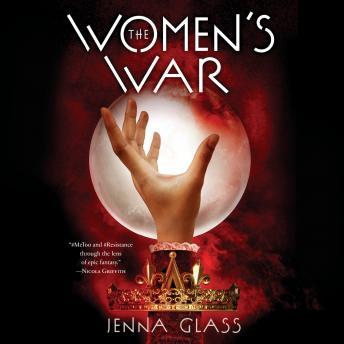 The Women's War: A Novel

Download or Stream instantly more than 55,000 audiobooks.
Listen to "The Women's War: A Novel" on your iOS and Android device.

In a feminist fantasy epic, a revolutionary spell gives women the ability to control their own fertility—with consequences that rock their patriarchal society to its core.

When a nobleman’s first duty is to produce a male heir, women are treated like possessions and bargaining chips. But as the aftereffects of a world-altering spell ripple out physically and culturally, women at last have a bargaining chip of their own. And two women in particular find themselves at the liberating crossroads of change.

Alys is the widowed mother of two adolescent children, and the disinherited daughter of a king. Her existence has been carefully regulated, but now she discovers a fierce talent not only for politics but also for magic—once deemed solely the domain of men. Meanwhile, in a neighboring kingdom, young Ellin finds herself unexpectedly on the throne after the sudden death of her grandfather the king and everyone else who stood ahead of her in the line of succession. Conventional wisdom holds that she will marry quickly, then quietly surrender the throne to her new husband. Only, Ellin has other ideas.

The tensions building in the two kingdoms grow abruptly worse when a caravan of exiled women and their escort of disgraced soldiers stumble upon a new source of magic in what was once uninhabitable desert. This new and revolutionary magic—which only women can wield—might well tear down what is left of the patriarchy. The men who currently hold power will do anything to retain it. But what force in the world can stand against the courage and resolution of generations of women who have tasted freedom for the very first time?

Praise for The Women’s War

“The Women’s War is an epic feminist fantasy for the #MeToo era. . . . The Women’s War does what so many classic adult fantasy books do not: It gives us a nuanced portrayal of grown women dealing with a wretchedly unfair society. It is rare to read a fantasy novel with a middle-aged mother as a main character. And it is refreshing to see women becoming heroes in a world that wishes to keep them muzzled.”—Sabaa Tahir, The New York Times Book Review

“A blend of the traditional Western European epic fantasy and the birth control revolution of the 1960s, The Women’s War takes the reader on a journey toward revolution. . . A fascinating and entertaining read, and a welcome addition to the world of epic fantasy.”—New York Journal of Books