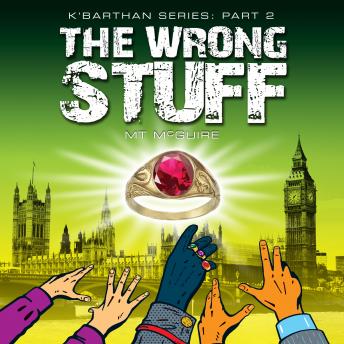 Download or Stream instantly more than 55,000 audiobooks.
Listen to "The Wrong Stuff" on your iOS and Android device.

A man called by fate. The wrong man

The Pan of Hamgee is not a natural knight in shining armour. Yet he has escaped from police custody in K’Barth, switched realities and foiled Lord Vernon’s attempt to kidnap Ruth, the Chosen One, from the Festival Hall. Pretty good, he thinks.

However, Ruth thinks otherwise. Being pursued by Lord Vernon is bad enough. Now, thanks to The Pan, she’s on the run. They are both alive, of course, but with Lord Vernon on their tail neither of them can be sure how long for.

To save K'Barth and Ruth, the woman of his dreams, The Pan must introduce her to the Candidate, who is prophesied to be the man of her dreams. And he must do it fast – before Lord Vernon finds her. But the gentleman in question is in hiding and no-one knows where. Only The Pan can find him, if he can bring himself to unite them.

A WORD WITH THE AUTHOR

Q - What made you write the K'Barthan Series? Why is it special?

A - You know the saying: that if the book you want doesn't exist you must write it? That. I love funny British authors, comedic sci fi, epic fantasy, adventure, action, humour - or humor. Misfit characters are great, the weirder the better and an evil baddie. I like genre fiction mashups: StarWars with alien races, flying cars, car chases, static powered laser guns. Dr Who meets Terry Pratchett and James Bond. K'Barth is kind of first contact, only not. There are many quirky characters, from 6ft Swamp Things with antennae to cute furry Blurpons with fluffy ears, big button eyes and penchant for extreme violence. But the eternal questions they face mirror ours.

This is the 2nd book in a series of 4. If you haven't listened Few Are Chosen, it's best to start there. The others are: