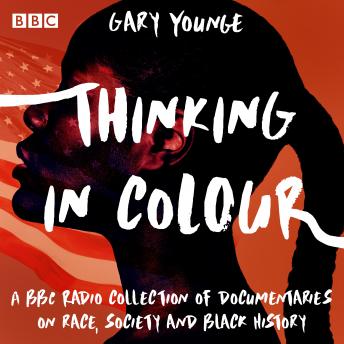 Download or Stream instantly more than 55,000 audiobooks.
Listen to "Thinking in Colour: A BBC documentary collection" on your iOS and Android device.

Author, broadcaster and sociology professor Gary Younge has won several awards for his books and journalism covering topics such as the civil rights movement, inequality and immigration. In this documentary collection, the former Guardian US correspondent turns his attention to current American political and social issues, including populist conservatism, and African-American identity.

In Thinking in Colour, he examines racial 'passing': light-skinned African-Americans who decided to live their lives as white people. Looking at the topic through the prism of Nella Larsen's 1929 novella Passing, Gary hears three astonishing personal stories, and probes the distinction between race and colour.

Recorded shortly after the historic 2008 election, The Documentary: Opposing Obama follows Gary as he travels through Arkansas and Kentucky, talking to people who see Barack Obama's presidency as nothing but bad news, and hearing their hopes and fears for the future.

In The Wales Window of Alabama, Gary recounts how the people of Wales helped rebuild an Alabama church, where bombers killed four girls in 1963. Hearing of the atrocity, sculptor John Petts rallied his local community to raise money, and subsequently created a new stained glass window that has become a focus for worship and a symbol of hope.

In Ebony: Black on White on Black, we hear the history of Ebony, the magazine that has charted and redefined African-American life since its launch in 1945. But what is its place in the world today, and does it still speak to contemporary African-Americans?

And in Analysis: Tea Party Politics, Gary assesses the Tea Party movement, a US right-wing protest group that objects to big government and high taxes. He finds out what sparked this grass-roots insurgency, who its supporters are, and analyses its impact.