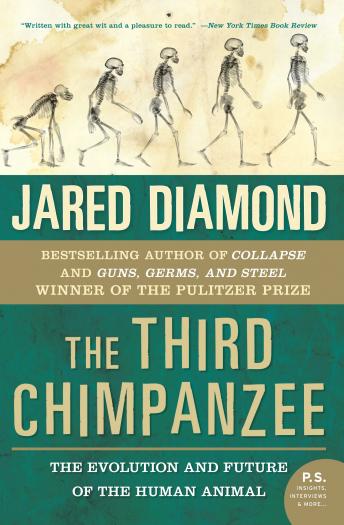 The Third Chimpanzee: The Evolution and Future of the Human Animal

Download or Stream instantly more than 55,000 audiobooks.
Listen to "The Third Chimpanzee: The Evolution and Future of the Human Animal" on your iOS and Android device.

The Development of an Extraordinary Species
We human beings share 98 percent of our genes with chimpanzees. Yet humans are the dominant species on the planet -- having founded civilizations and religions, developed intricate and diverse forms of communication, learned science, built cities, and created breathtaking works of art -- while chimps remain animals concerned primarily with the basic necessities of survival. What is it about that two percent difference in DNA that has created such a divergence between evolutionary cousins? In this fascinating, provocative, passionate, funny, endlessly entertaining work, renowned Pulitzer Prize–winning author and scientist Jared Diamond explores how the extraordinary human animal, in a remarkably short time, developed the capacity to rule the world . . . and the means to irrevocably destroy it.