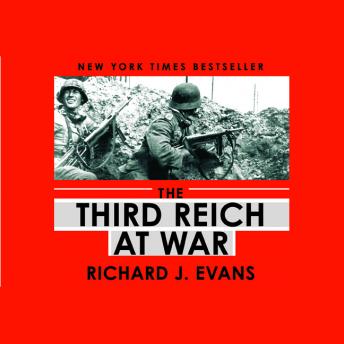 The Third Reich at War

Download or Stream instantly more than 55,000 audiobooks.
Listen to "The Third Reich at War" on your iOS and Android device.

The final volume in Richard J. Evans's masterly trilogy on the history of Nazi Germany traces the rise and fall of German military might, the mobilization of a "people's community" to serve a war of conquest, and Hitler's campaign of racial subjugation and genocide

Already hailed as "a masterpiece" (William Grimes in The New York Times) and "the most comprehensive history... of the Third Reich" (Ian Kershaw), this epic trilogy reaches its terrifying climax in this volume.

Evans interweaves a broad narrative of the war's progress with viscerally affecting personal testimony from a wide range of people-from generals to front-line soldiers, from Hitler Youth activists to middle-class housewives. The Third Reich at War lays bare the dynamics of a nation more deeply immersed in war than any society before or since. Fresh insights into the conflict's great events are here, from the invasion of Poland to the Battle of Stalingrad to Hitler's suicide in the bunker. But just as important is the re-creation of the daily experience of ordinary Germans in wartime, staggering under pressure from Allied bombing and their own government's mounting demands upon them. At the center of the book is the Nazi extermination of Europe's Jews, set in the context of Hitler's genocidal plans for the racial restructuring of Europe.

Blending narrative, description and analysis, The Third Reich at War creates an engrossing picture-at once sweeping and precise-of a society rushing headlong to self-destruction and taking much of Europe with it. It is the culmination of a historical masterwork that will remain the most authoritative work on Nazi Germany for years to come.