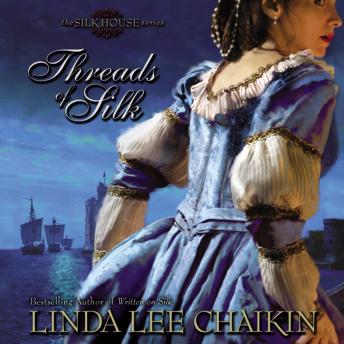 Download or Stream instantly more than 55,000 audiobooks.
Listen to "Threads of Silk" on your iOS and Android device.

Royal French Court intrigue surrounds a beautiful young couturiere and her dashing nobleman-husband as Queen Mother Catherine de Medici unfolds her devious scheme to preserve her reign. Rachelle Macquinet, couturiére from one of France's most celebrated silk-making families, is under palace arrest at Fontainebleau. While creating a royal gown, she is ensnared, along with her husband, Marquis Fabien de Vendome, in the Queen Mother's secret murderous scheme. Fabien has returned from a venture against Spain to claim Rachelle as his bride, but not without a price: the Queen Mother plans to implicate him in an assassination! Fabien and Rachelle are caught in history's deadly swirl and love's uncertainties as they seek to escape to the safety of England. Faith in Christ must uphold them in a time of great persecution that demands greater courage. Rachelle Dushane-Macquinet, couturiere from a celebrated silk-making family, has come back to the Louvre Palais to create the royal wedding gown. Recruited into the evil Queen Mother's ring of women spies, she must use her wits to preserve her honor-and the lives of her fellow Huguenots. Marquis Fabien de Vendome has also returned from a buccaneering venture against Spain. The Queen Mother plans to implicate him in an assassination. But Fabien has designs of his own. A man and a woman caught up in history's deadly swirl and love's uncertainties seek to escape the venom of Madame le Serpent. Faith in Christ must uphold them, and all who stand alone, in a city gone diabolically mad.