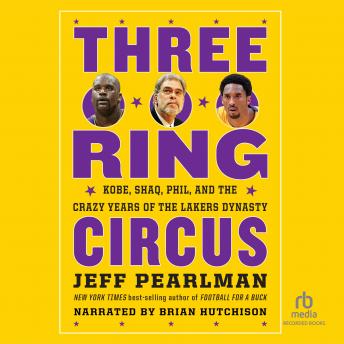 Three-Ring Circus: Kobe, Shaq, Phil, and the Crazy Years of the Lakers Dynasty

Download or Stream instantly more than 55,000 audiobooks.
Listen to "Three-Ring Circus: Kobe, Shaq, Phil, and the Crazy Years of the Lakers Dynasty" on your iOS and Android device.

The inside story of the Los Angeles Lakers from 1996 through 2004, when Kobe Bryant and Shaquille
O’Neal combined—and collided—to help bring the Lakers three straight championships and restore the team
as a powerhouse franchise

In modern sports, there have never been two superstar teammates who loathed one another the way Shaq loathed
Kobe and Kobe loathed Shaq. There was whispered—and outspoken—sniping and sparring. Taunts. Physical
altercations. The recurring threats of trades. This was warfare disguised as NBA basketball. And yet, despite eight years
of infighting and hostility, by turns mediated and encouraged by idiosyncratic coach Phil Jackson, the Shaq-Kobe duo
resulted in one of the greatest, most enduring, and ever-evolving teams in NBA history.

Just as Kobe and Shaq entertained huge crowds of fans at the Forum (and later Staples Center), so they also
provided a nonstop sideshow for their cast of supporting players—including Glen Rice, Robert Horry, Rick Fox, Karl
Malone, J.R. Rider, and briefly even Dennis Rodman—whose games often seem enhanced by their biggest stars as
they tried mightily not to pick sides.

With Kobe Bryant’s tragic death in 2020, Three-Ring Circus also serves as an extraordinary coming-of-age tale
about one of our era’s most revered athletes. Bryant’s competitiveness, insecurities, and inspiring growth as a player
come into full focus. As best-selling sportswriter Jeff Pearlman shows in this rollicking masterpiece of reporting, legacy
is never simple.