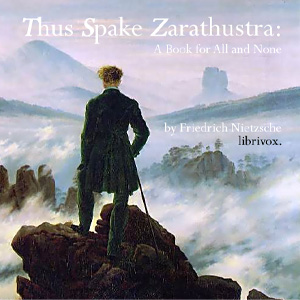 Download or Stream instantly more than 55,000 audiobooks.
Listen to "Thus Spake Zarathustra" on your iOS and Android device.

Friedrich Wilhelm Nietzsche (1844–1900) was a nineteenth-century German philosopher. He wrote critical texts on religion, morality, contemporary culture, philosophy and science, using a distinctive German language style and displaying a fondness for aphorism. Nietzsche's influence remains substantial within and beyond philosophy, notably in existentialism and postmodernism.

Thus Spake Zarathustra (Also sprach Zarathustra), is a work composed in four parts between 1883 and 1885. Much of the work deals with ideas such as the "eternal recurrence of the same", the parable on the "death of God", and the "prophecy" of the Overman, which were first introduced in The Gay Science. Described by Nietzsche himself as "the deepest ever written", the book is a dense and esoteric treatise on philosophy and morality, featuring as protagonist a fictionalized Zarathustra. A central irony of the text is that the style of the Bible is used by Nietzsche to present ideas of his which fundamentally oppose Judaeo-Christian morality and tradition. (Summary from Wikipedia)