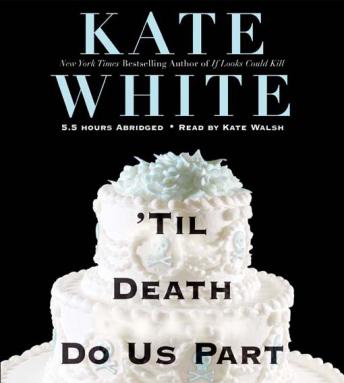 'Til Death Do Us Part

Download or Stream instantly more than 55,000 audiobooks.
Listen to "'Til Death Do Us Part" on your iOS and Android device.

True crime writer and sometime-sleuth Bailey Weggins took the world by storm in Kate White's sexy and suspenseful debut novel, If Looks Could Kill. Now, in Bailey's latest outing, she takes the plunge into a world of domestic divas and deadly nuptial doings... When she gets a call from Ashley Hanes on a frigid night, Bailey expects to be hit up for fashion show tickets. Instead Ashley reveals that two bridesmaids from Peyton Cross's wedding have recently died in freak accidents...and Ashley is terrified she's next. A bridesmaid herself-with the dress to prove it-Bailey dashes off to Ivy Hill Farm, the home of Peyton's catering empire in Greenwich, Connecticut. Bailey's barely warmed up after the cold drive before another bridesmaid takes a walk down the aisle of no return. Now following a dangerous trail of clues that will take her from New York's trendy Lower East Side to a fabulous oceanfront hotel in Miami, Bailey could become the headline of the next true crime story: Four Funerals and a Wedding.