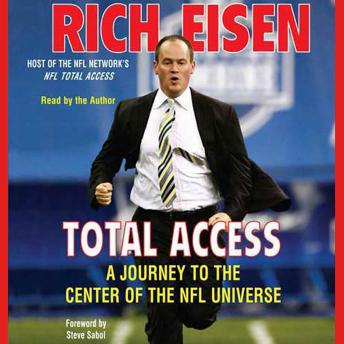 Total Access: A Journey to the Center of the NFL Universe

Download or Stream instantly more than 55,000 audiobooks.
Listen to "Total Access: A Journey to the Center of the NFL Universe" on your iOS and Android device.

Sports fans are hungry for access! Fans of football are tired of lame, poorly written memoirs or technical fantasy football books. Rich Eisen is going to give them what they want—a chance to share his world of a never-ending football season.
As host of the NFL Network's marquee show Total Access, Eisen is truly the ultimate fly on the wall and one of only a handful of people who attend almost every event on the NFL calendar from the Super Bowl and the Pro Bowl to the NFL Draft to the Hall of Fame Weekend and regular season kickoff. Talking in a style that is truly his own, Eisen
provides the rabid fan with news, interviews, and analysis with his razor sharp wit honed by years of experience.
Total Access will cover every aspect of pro football including:
• Eisen's unique take on the off season events
• On and off field controversies
• The facts you don't get from a stat book
Eisen shows listeners the football world in a completely new, entertaining and insightful way, just like Jon Stewart revolutionized America's political news. It is the ultimate audiobook for fans everywhere.