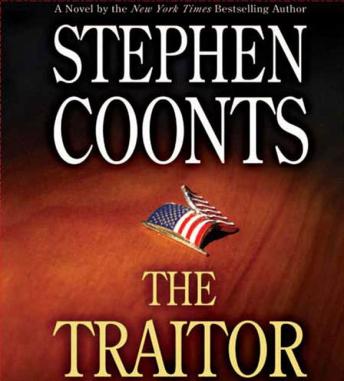 The Traitor: A Tommy Carmellini Novel

Download or Stream instantly more than 55,000 audiobooks.
Listen to "The Traitor: A Tommy Carmellini Novel" on your iOS and Android device.

When he is assigned to Paris, CIA officer Tommy Carmellini joins his old boss Jake Grafton on a bold mission: To locate a French intelligence agent who has secret investments in the Bank of Palestine. Together they work to unravel a tangle of espionage, deception, and murder...and develop an elaborate strategy to infiltrate the highest levels of Al Queda.
Meanwhile, the leaders of the G-8 industrialized nations will soon meet in Paris-an event that would make a tempting terrorist target. Throw into the mix the beautiful, clever daughter of the French ambassador to Washington and an Israeli spy or two, and the stage is set for a tour de force of deception and drama.
Soon Carmellini and Grafton unearth a horrifying plan to shake the West as never before. But can they stop the conspiracy without compromising the intelligence source that could bring down Al Queda once and for all? Find out in Stephen Coonts's The Traitor.