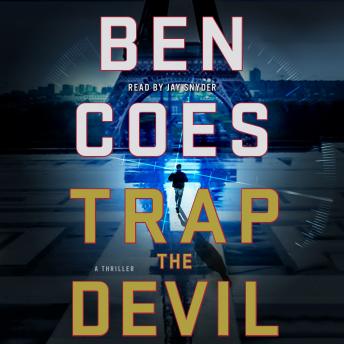 Trap the Devil: A Thriller

Download or Stream instantly more than 55,000 audiobooks.
Listen to "Trap the Devil: A Thriller" on your iOS and Android device.

'Intense and gripping...Coes' name should be on the lips of every reader who enjoys Vince Flynn and the Brads (Taylor and Thor).' -Booklist (starred review) on Trap the Devil
Only one man stands between a powerful cabal planning an invisible coup of the U.S. government and their brutal goals-Dewey Andreas.
A group of some of the most powerful people in the government, the military, and the private sector, has begun a brutal plan to quietly take over the reins of the U.S. government. They've begun to remove the people who stand in their way-and replace them with their own sympathizers and puppets. They've already taken out the Speaker of the House-whose death was made to look like an accidental drowning-and the president and vice president are next. Once they have their own people in place, they plan to start a bloody, brutal war on an unimaginable scale.
On restricted duty while he recovers from injuries incurred on a previous mission, Dewey Andreas is sent to Paris by CIA Director Hector Calibrisi. The Secretary of State is going there for secret talks, and Dewey is to be an extra layer of security above the State Department team. But what should be an easy mission couldn't go more wrong. The cabal has sent in a hit man to take out the Secretary of State and lay the blame for this murder at the feet of Dewey himself.
With the Secretary of State dead, shot by Dewey's weapon, Dewey is on the run and out in the cold, desperately trying to unravel the plot before the conspirators succeed in killing millions of innocents.