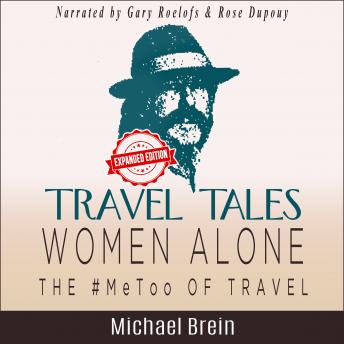 Travel Tales: Women Alone-The #MeToo of Travel!: How to Survive as a Solo Woman Traveler Overseas

Download or Stream instantly more than 55,000 audiobooks.
Listen to "Travel Tales: Women Alone-The #MeToo of Travel!: How to Survive as a Solo Woman Traveler Overseas" on your iOS and Android device.

THIS SERIESThese are the true travel tales of solo women travelers being sexually harassed and assaulted in their travels around the world and what some of them were able to do about it! This is a book about how to survive as a solo woman traveler abroad.They are shouting "Me Too!" to you through these pages! No one should be subjected to the despicable, disgusting and degrading behaviors that these women have had to put up with at the hands of men who should be relegated to the dregs of humanity!I've interviewed nearly 2,000 world travelers. I've weaved the best of their 10,000 travel tales into a psychology of travel as revealed by these very telling stories.These are travelers I've met on airplanes, trains, buses, ships, tours, safaris, and in hotels, campgrounds, cafes, and pubs.These courageous travelers have shared their most personal travel experiences, some good and wonderful and others horrific and life-threatening, which I, in turn, share with you now through my True Travel Tales series.THIS BOOKTravel Tales: Women Alone is Volume 3 of the True Travel Tales series and deals with safety and security of the woman solo traveler. It is about how to travel safely throughout the world.Unfortunately, travel today finds us in a world of growing terror threats, the imposition of severe and strict cultural and religious restrictions on women's rights and freedoms, as well as decreasing tolerance for cultural and religious differences and diversity around the world.For women traveling alone, having to deal with hassles and assaults is daunting in the least. For women alone, travel mostly is exciting and relatively safe, but for many women, traveling in some countries, particularly in North Africa and the Middle East, can often be traumatic and downright dangerous.I have tales of women constantly being bothered and harassed. And, sad to say, some women have even disappeared, never to be seen again.To be a woman and to travel alone in such forbidding places is not for the faint of heart. Many young women are naively unaware and must be exceedingly careful in their interactions with men overseas.Just because men are well-dressed and speak your language does not necessarily mean that they can be trusted.Every woman traveling abroad needs to know about and prepare herself for dealing with such things. Again, while travel is mostly safe, it can also be foreboding and downright dangerous at times and one must be prudent. If I were you, I'd think very carefully about traveling to some parts of the world as a woman ALONE!Women have shared hundreds of travel stories with me about how they have had to fend off - yes, even fight off at times - the unwanted advances of men, ranging from verbal harassment, unwanted touching, exposure, and, yes, even rape!Women have said to me, "Yes, I should have known better; I should have seen the signs." DISCLAIMERPlease know that some stories in the Travel Tales series may be graphic, unpleasant, and disturbing.This series is aimed towards a mature adult audience. Yet, Some material ought to be communicated in a clear and responsible manner to younger and relatively inexperienced travelers who could benefit by knowing how to travel more safely and securely.No story in the series is meant to depict any country, people, race, culture or religion in a