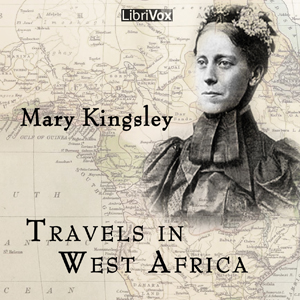 Download or Stream instantly more than 55,000 audiobooks.
Listen to "Travels in West Africa" on your iOS and Android device.

Mary Henrietta Kingsley (13 October 1862 - 3 June 1900) was an British explorer and writer who greatly influenced European ideas about Africa and its people. Kingsley was an outspoken critic of European colonialism, a champion for indigenous customs, and a dedicated campaigner for a revised British policy which supported traders and merchants over the needs of settlers and missionaries.

Her adventures were extraordinary and fascinating. Among other things she fought with crocodiles, fell into native spear traps and was caught in a tornado on the slopes of Mount Cameroon. She traveled in West Africa wearing the same clothes she always wore in England: long, black, trailing skirts, tight waists, high collars and a small fur cap. These same clothes saved her life when she fell into a game pit, the many petticoats protecting her from being impaled on the stakes below.

This is her story in her own words of her adventures and the people and culture of West Africa. (Summary by Kehinde)