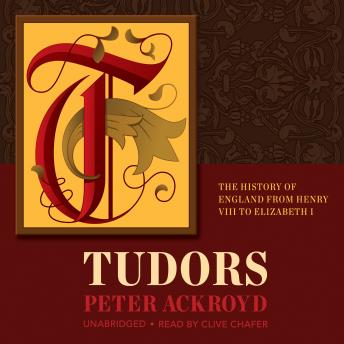 Tudors: The History of England from Henry VIII to Elizabeth I

Download or Stream instantly more than 55,000 audiobooks.
Listen to "Tudors: The History of England from Henry VIII to Elizabeth I" on your iOS and Android device.

From Henry VIII's cataclysmic break with Rome to theepic rule of Elizabeth I, the age of the Tudors comes to vivid life on the page.
Peter Ackroyd, one of Britain's most acclaimedwriters, brings the age of the Tudors to vivid life in this monumental book inhis History of England series, charting the course of English history fromHenry VIII's cataclysmic break with Rome to the epic rule of Elizabeth I.
Rich in detail and atmosphere, Tudors is thestory of Henry VIII's relentless pursuit of both the perfect wife and theperfect heir, of how the brief royal reign of the teenage king, Edward VI, gaveway to the violent reimposition of Catholicism and the stench of bonfires under"Bloody Mary." It tells, too, of the long reign of Elizabeth I, which, thoughmarked by civil strife, plots against her, and even an invasion force, finallybrought stability.
Above all, it is the story of the EnglishReformation and the making of the Anglican Church. At the beginning of thesixteenth century, England was still largely feudal and looked to Rome for direction;at its end, it was a country where good governance was the duty of the state,not the church, and where men and women began to look to themselves for answersrather than to those who ruled them.