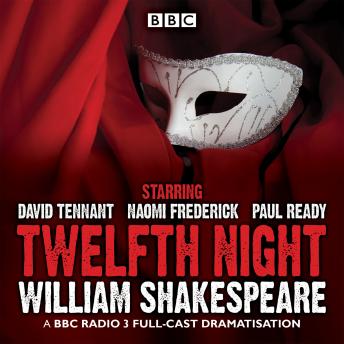 Download or Stream instantly more than 55,000 audiobooks.
Listen to "Twelfth Night: A BBC Radio 3 full-cast drama" on your iOS and Android device.

David Tennant stars as Malvolio in Shakespeare's comedy of disguise, madness and love.

One of Shakespeare's happiest plays, Twelfth Night is both a comedy of misrule and a trenchant attack on puritanism. Disguise and deceit leads to misadventure, madness and mistaken love. Orsino loves Olivia, but she loves Cesario, who really does love Orsino (for Cesario is actually Viola). But Malvolio believes his mistress, Olivia, loves him, as he is a victim of a trick played on him by those who would make him mad. Naomi Frederick and Paul Ready are Viola and Orsino in his sparkling BBC Radio 3 production.