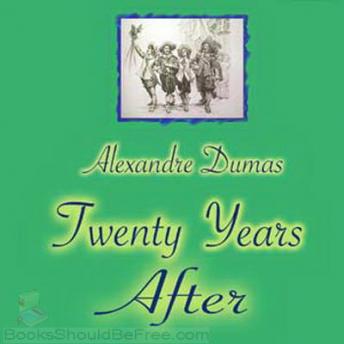 Download or Stream instantly more than 55,000 audiobooks.
Listen to "Twenty Years After" on your iOS and Android device.

The novel follows events in France during La Fronde, during the childhood reign of Louis XIV, and in England near the end of the English Civil War, leading up to the victory of Oliver Cromwell and the execution of King Charles I. Dumas comes out on the side of the monarchy in general, or at least he supports the idea of a well-meaning, liberal monarchy. His musketeers are valiant and just in their efforts to protect young Louis XIV and the doomed Charles I from their attackers. This book is the least well-known of the Musketeer saga but works effectively as a sequel, with reappearances by most main characters (or children of main characters) and a number of subplots.