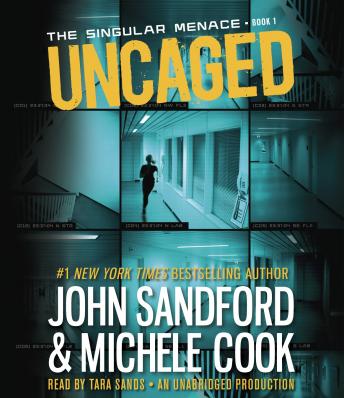 Download or Stream instantly more than 55,000 audiobooks.
Listen to "Uncaged (The Singular Menace, 1)" on your iOS and Android device.

John Sandford and Michele Cook debut a high-octane thriller series about a ruthless corporation, unspeakable experiments, and a fight to expose the truth. Perfect for fans of James Dashner's The Maze Runner.

Shay Remby arrives in Hollywood with $58 and a handmade knife, searching for her brother, Odin.

Odin’s a brilliant hacker but a bit of a loose cannon. He and a group of radical animal-rights activists hit a Singular Corp. research lab in Eugene, Oregon. The raid was a disaster, but Odin escaped with a set of highly encrypted flash drives and a post-surgical dog.

When Shay gets a frantic 3 a.m. phone call from Odin—talking about evidence of unspeakable experiments, and a ruthless corporation, and how he must hide—she’s concerned. When she gets a menacing visit from Singular’s security team, she knows: her brother’s a dead man walking.

What Singular doesn’t know—yet—is that 16-year-old Shay is every bit as ruthless as their security force, and she will burn Singular to the ground, if that’s what it takes to save her brother.