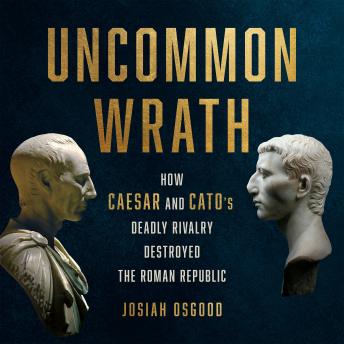 Download or Stream instantly more than 55,000 audiobooks.
Listen to "Uncommon Wrath: How Caesar and Cato's Deadly Rivalry Destroyed the Roman Republic" on your iOS and Android device.

A dual biography of Julius Caesar and Cato the Younger that offers a dire warning: republics collapse when partisanship overrides the common good.

In Uncommon Wrath, historian Josiah Osgood tells the story of how the political rivalry between Julius Caesar and Marcus Cato precipitated the end of the Roman Republic. As the champions of two dominant but distinct visions for Rome, Caesar and Cato each represented qualities that had made the Republic strong, but their ideological differences entrenched into enmity and mutual fear. The intensity of their collective factions became a tribal divide, hampering their ability to make good decisions and undermining democratic government. The men’s toxic polarity meant that despite their shared devotion to the Republic, they pushed it into civil war.

Deeply researched and compellingly told, Uncommon Wrath is a groundbreaking biography of two men whose hatred for each other destroyed the world they loved.