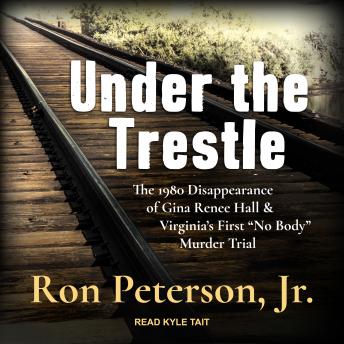 Under the Trestle: The 1980 Disappearance of Gina Renee Hall & Virginia's First "No Body" Murder Trial.

Download or Stream instantly more than 55,000 audiobooks.
Listen to "Under the Trestle: The 1980 Disappearance of Gina Renee Hall & Virginia's First "No Body" Murder Trial." on your iOS and Android device.

Under the Trestle is the true story of the most compelling murder case in Virginia history. In 1980, beautiful Gina Renee Hall, a Radford University freshman, went to a Virginia Tech nightclub on a Saturday night. She was never seen again. Her abandoned car was found parked beneath a railroad trestle bridging the New River, with blood in the trunk. The investigation led police to a secluded cabin on Claytor Lake, where there was evidence of a violent attack. Former Virginia Tech football player Stephen Epperly was charged with murder, despite the fact that Gina's body was never found. In Virginia's 'trial of the century,' prosecutor Everett Shockley presented an entirely circumstantial case. Key witnesses against Epperly included his best friend, his mother, and a tracking dog handler later believed by many to be a fraud. Three former Virginia Tech football players testified, including a Hokies quarterback once featured on the cover of Sports Illustrated. Would Epperly become the first person in Virginia history convicted of murder without the victim's body, an eyewitness, or a confession? And would authorities ever find the body of Gina Renee Hall?