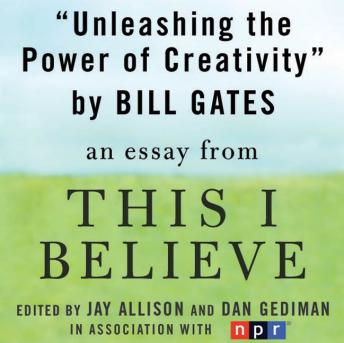 Unleashing the Power of Creativity: A 'This I Believe' Essay

Download or Stream instantly more than 55,000 audiobooks.
Listen to "Unleashing the Power of Creativity: A 'This I Believe' Essay" on your iOS and Android device.

Bill Gates discusses his optimism that creativity and intelligence will make the world a better place in 'Unleashing the Power of Creativity,' his contribution to NPR's This I Believe series.

This I Believe is a National Public Radio program that features Americans, from the famous to the unknown, completing the thought that begins with the series title. The pieces that make up the program compel listeners to re-think not only what and how they have arrived at their own personal beliefs, but also the extent to which they share them with others.

Featuring a star-studded list of contributors that includes John McCain, Isabel Allende, and Colin Powell, as well as pieces from the original 1950's series including Helen Keller and Jackie Robinson, the This I Believe collection also contains essays by a Brooklyn lawyer, a woman who sells yellow pages advertising in Fort Worth, and a man who serves on the state of Rhode Island's parole board. The result is a stirring, funny and always provocative trip inside the minds and hearts of a diverse group of Americans whose beliefs, and the incredibly varied ways in which they choose to express them, reveal the American spirit at its best.

This short audio essay is an excerpt from the audiobook edition of the This I Believe anthology.