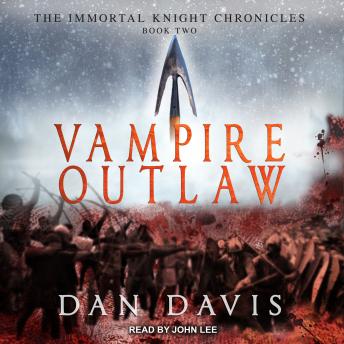 Download or Stream instantly more than 55,000 audiobooks.
Listen to "Vampire Outlaw" on your iOS and Android device.

The Immortal Knight, Richard of Ashbury, does battle with the undead outlaws of Sherwood.

AD 1216. A band of outlaws attacks an English manor in the dead of night. The bloody trail leads to the dark heart of Sherwood Forest and Richard is certain that his old enemy, William de Ferrers, has returned. But England is in turmoil. The barons have erupted into armed rebellion against King John and a French army has invaded the south, seeking to crown a French prince as the King of England. Richard must do his duty to save England. But he must also journey deep into Sherwood to destroy William and rescue the Lady Marian before she is devoured or turned.

Book 2 of the Immortal Knight Chronicles takes up twenty-five years after the end of Vampire Crusader. Featuring thrilling sword fights, skillful archery, epic medieval battles, political intrigue while weaving real history with the origins of the Robin Hood myth, this is exciting, action-packed historical fiction with a twist.