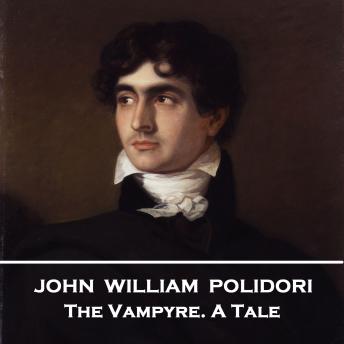 The Vampyre. A Tale

Download or Stream instantly more than 55,000 audiobooks.
Listen to "The Vampyre. A Tale" on your iOS and Android device.

John William Polidori was born on 7th September 1795 in London to Gaetano Polidori, an Italian political émigré scholar, and Anna Maria Pierce, an English governess. He was the eldest of 8 children.From 1804 Polidori was a pupil at the recently formed Ampleforth College. In 1810 he proceeded to the University of Edinburgh, where he wrote a thesis on sleepwalking and received his degree as a doctor of medicine on 1st August 1815. He was 19.In 1816, Dr. Polidori was given the job of Byron's personal physician and accompanied him on a trip through Europe. The publisher John Murray offered Polidori £500 to keep a diary of their travels. At the Villa Diodati, Byron's rented villa at Lake Geneva in Switzerland, the pair met with Mary Wollstonecraft Godwin, Percy Bysshe Shelley, and Mary's stepsister, Claire Clairmont.One night in June, after the company had read aloud from a French collection of German horror tales, Byron suggested they each write a ghost story. There were to be two outstanding works from that evening; 'Frankenstein' by Mary Shelley and Polidori's 'The Vampyre' which would be the first published modern vampire story in English.Dismissed by Byron, Polidori traveled in Italy and then returned to England. His story, 'The Vampyre', was published in the April 1819 issue of New Monthly Magazine without his permission. Much to the annoyance of both Polidori and Byron it was the latter who was credited as author. Polidori also had published 'Ximenes, The Wreath & Other Poems' in 1819 and his long theological and sacred poem 'The Fall of the Angels' in 1821 as well as two plays, essays and his diary. Despite his youth Polidori was increasingly worn down by gambling debts and depression. John William Polidori died on 24th August 1821 at the age of only 25 in London. Although his death was recorded as death by natural causes, strong evidence asserts that it was suicide by means of cyanide.