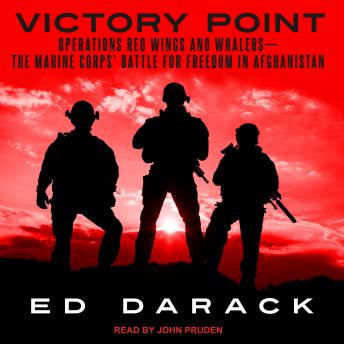 Download or Stream instantly more than 55,000 audiobooks.
Listen to "Victory Point: Operations Red Wings and Whalers - the Marine Corps' Battle for Freedom in Afghanistan" on your iOS and Android device.

In late June 2005, media sources recounted the tragic story of nineteen U.S. special operations personnel who died at the hands of insurgent/terrorist leader Ahmad Shah-and the lone survivor of Shah's ambush-deep in the Hindu Kush Mountains of Afghanistan. The harrowing events of Operation Red Wings marked an important-yet widely misreported-chapter in the Global War on Terror, the full details of which the public burned to learn.

Victory Point reveals the complete, as-yet untold, story of Operation Red Wings (often mis-referenced as 'Operation Redwing'), and the follow-on mission, Operation Whalers. Together, these two U.S. Marine Corps operations (that in the case of Red Wings utilized Navy SEALs for its opening phase) unfurl not as a mission gone terribly wrong, but of a complex and difficult campaign that ultimately saw the demise of Ahmad Shah and his small army of barbarous fighters.

Due to the valor, courage, and commitment of the 2nd Battalion of the 3rd Marine Regiment in the summer of 2005, Afghanistan was able to hold free elections that Fall. Here is the inspiring true account of heroism, duty, and brotherhood between Marines fighting the War on Terror.