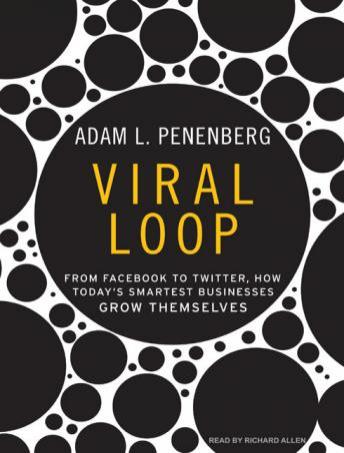 Download or Stream instantly more than 55,000 audiobooks.
Listen to "Viral Loop: From Facebook to Twitter, How Today's Smartest Businesses Grow Themselves" on your iOS and Android device.

Many of the most successful Web 2.0 companies, including MySpace, YouTube, eBay, and rising stars like Twitter and Flickr, are prime examples of what journalist Adam L. Penenberg calls a 'viral loop'-to use the product means having to share it with others. After all, what's the sense of being on Facebook if none of your friends are? The end result is a business that spreads rapidly, scales quickly, and has the promise to create staggering wealth. In this game-changing, essential book, Penenberg-who identified the phenomenon in a ground-breaking cover story for Fast Company-tells the fascinating, vivid story of the entrepreneurs who first harnessed the unprecedented potential of viral loops to create the successful online businesses (some with billion-dollar valuations) that we have all grown to rely on.

While Viral Loop is fascinating for Penenberg's savvy, incisive explanation of the concept, it's even more valuable for its prescriptive nature. Throughout the book, Penenberg illustrates how any kind of business can uncork viral loops to benefit its own bottom line, even retrofitting the concept for the offline world.

Penenberg explores viral loops and their impact on contemporary American business, while illustrating how all kinds of businesses-from the smallest start-ups to nonprofit organizations to the biggest multinational corporations-can use the paradigm-busting power of viral loops to enable their business through technology.