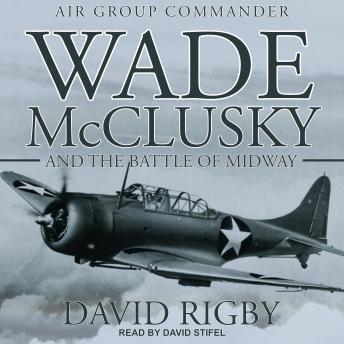 Wade McClusky and the Battle of Midway

Download or Stream instantly more than 55,000 audiobooks.
Listen to "Wade McClusky and the Battle of Midway" on your iOS and Android device.

The story of the man who won the battle of Midway and avenged Pearl Harbor for the United States.

During the Battle of Midway in June 1942, U.S. Navy dive bomber pilot Wade McClusky proved himself to be one of the greatest pilots and combat leaders in American history, but his story has never been told-until now.

It was Wade McClusky who remained calm when the Japanese fleet was not where it was expected to be. It was he who made the counterintuitive choice to then search to the north instead of to the south. It was also McClusky who took the calculated risk of continuing to search even though his bombers were low on fuel and may not have enough to make it back to the Enterprise. His ability to remain calm under enormous pressure played a huge role in the U.S. Navy winning this decisive victory that turned the tide of war in the Pacific.