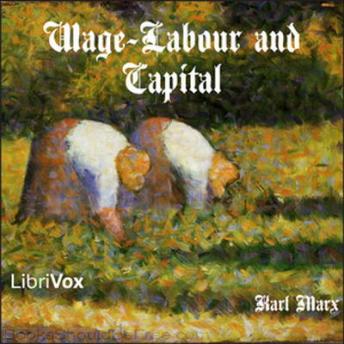 Download or Stream instantly more than 55,000 audiobooks.
Listen to "Wage-Labour and Capital" on your iOS and Android device.

Orignally written as a series of newspaper articles in 1847, Wage-Labour and Capital was intended to give a short overview, for popular consumption, of Marx’s central threories regarding the economic relationships between workers and capitalists. These theories outlined include the Marxian form of the Labour Theory of Value, which distinguishes “labour” from “labour-power”, and the Theory of Concentration of Capital, which states that capitalism tends towards the creation of monopolies and the disenfranchisement of the middle and working classes. The Theory of Alienation, which describes a dehumanising effect of capitalist production, in which an immediate social signifcance of labour to the worker is absent, is also touched upon. These theories were later elaborated in Volume 1 of Capital, published in 1867.

This edition of Wage-Labour and Capital, published in 1891, was edited and translated by Friedrich Engels, and remains one of the most widely read of Marx’s works.