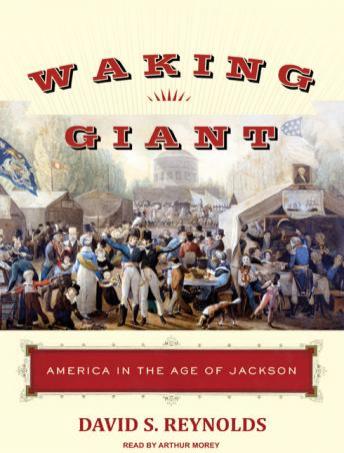 Waking Giant: America in the Age of Jackson

Download or Stream instantly more than 55,000 audiobooks.
Listen to "Waking Giant: America in the Age of Jackson" on your iOS and Android device.

The years from 1815 to 1848 were arguably the richest period in American life. In Waking Giant, award-winning historian David S. Reynolds illuminates the era's exciting political story alongside the fascinating social and cultural movements that influenced it. He casts fresh light on Andrew Jackson, who redefined the presidency, as well as John Quincy Adams and James K. Polk, who expanded the nation's territory and strengthened its position internationally.

Waking Giant captures the turbulence of a democracy caught in the throes of the slavery controversy, the rise of capitalism, and the birth of urbanization. Reynolds reveals unknown dimensions of the Second Great Awakening with its sects, cults, and self-styled prophets. He brings alive the reformers, abolitionists, and prohibitionists who struggled to correct America's worst social ills. He uncovers the political roots of some of America's greatest authors and artists, from Ralph Waldo Emerson and Edgar Allan Poe to Thomas Cole and Asher B. Durand, and he re-creates the shocking phenomena that marked the age: bloody duels and violent mobs; Barnum's freaks and all-seeing mesmerists; polygamous prophets and wealthy prostitutes; table-lifting spiritualists and rabble-rousing feminists. All were crucial to the political and social ferment that led to the Civil War. Meticulously researched and masterfully written, Waking Giant is a brilliant chronicle of America's vibrant and tumultuous rise.