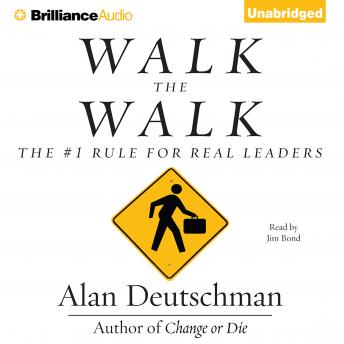 Walk the Walk: The #1 Rule for Real Leaders

Download or Stream instantly more than 55,000 audiobooks.
Listen to "Walk the Walk: The #1 Rule for Real Leaders" on your iOS and Android device.

Most leaders focus too much on what they say and not nearly enough on setting an example. This audiobook shows what happened in those unusual cases of true leaders—in business, education, the military, and nonprofits—who always walked the walk, especially when times got tough. In a skeptical world, their actions gave them more credibility than even the best possible speeches. Consider how

• Herb Kelleher and Colleen Barrett of Southwest Airlines were serious about putting employees first, and proved it by sticking to a no-layoffs policy while other airlines made major cuts.

• Sony founder Masuro Ibuka, who stressed originality over profits, waited for years while his competitors made color televisions—and then released the Trinitron, a breakthrough product that blew the other sets out of the water.

• Martin Luther King Jr. was so committed to nonviolence that he let a racist detractor beat him up in front of a crowded auditorium rather than raise a hand against him.

Ultimately, leadership doesn’t depend on who you are, what you say, or how you say it, but only on what you do. The eye-opening examples in Walk the Walk will inspire leaders at all levels.