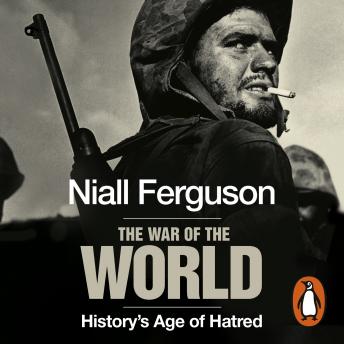 The War of the World: History's Age of Hatred

Download or Stream instantly more than 55,000 audiobooks.
Listen to "The War of the World: History's Age of Hatred" on your iOS and Android device.

Penguin presents the unabridged edition of The War of the World by Niall Ferguson, read by Saul Reichlin.

The world at the beginning of the 20th century seemed for most of its inhabitants stable and relatively benign. Globalizing, booming economies married to technological breakthroughs seemed to promise a better world for most people. Instead, the 20th century proved to be overwhelmingly the most violent, frightening and brutalized in history with fanatical, often genocidal warfare engulfing most societies between the outbreak of the First World War and the end of the Cold War. What went wrong? How did we do this to ourselves? The War of the World comes up with compelling, fascinating answers. It is Niall Ferguson's masterpiece.

'A heartbreaking, serious and thoughtful survey of human evil that is utterly fascinating and dramatic' Simon Sebag Montefiore, The New York Times

'History at its most controversial ... no one can afford to overlook it' Allan Mallinson