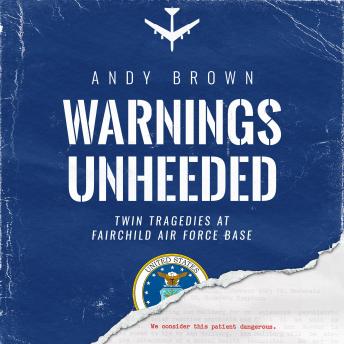 Download or Stream instantly more than 55,000 audiobooks.
Listen to "Warnings Unheeded: Twin Tragedies at Fairchild Air Force Base" on your iOS and Android device.

On 20 June 1994, a gunman opened fire inside the busy hospital of Fairchild Air Force Base. Four days later, the crash of a B-52 bomber killed some of Fairchild's most veteran aviators. The twin tragedies struck suddenly – but not without warning.

'This nonfiction narrative is a page turner... you will not put it down.' —CMSgt William Kelly, USAF, Office of Special Investigations

Warnings Unheeded is the work of criminal investigator Andy Brown. As a young military policeman, Brown saved countless lives when he raced to the hospital and ended the gunman’s shooting spree. His devotion to duty prepared him for the deadly gunfight, but he wasn't prepared for the traumatic effect of learning that twenty-six people had been gunned down prior to his arrival, or for the loss of four aviators later that week.

On a quest for answers, Brown spent two decades investigating the events that led to the mass murder and the plane crash. His relentless research uncovered numerous people who had warned of the impending violence and disaster. With heavy use of firsthand accounts, Warnings Unheeded lets us experience the unfolding tragedies through the eyes of the men and women who struggled to prevent them. From the people who tried to help a troubled airman even as he plotted to kill them. From the aviators who were forced to fly with a seemingly-suicidal pilot. And from a military policeman who offers a candid insight into the hidden cost of becoming a “hero.”

Warnings Unheeded is a story of heroes and humanity – of violence and mental illness – and if we are willing to listen, a timeless warning from the ghosts of our past.